Riya Sen is debuting in Bengali web series with Hoichoi’s latest ‘Mismatch 2’. After the grand success of ‘Mismatch’, Hoichoi is coming up with its season 2 starring Rajdeep Gupta, Riya Sen, Mainak Banerjee and Rachel White. Before it starts streaming on May, team LaughaLaughi caught Riya Sen for a chitchat.

Riya –No, ‘Mismatch 2’ has no connection with its first season.

Riya – All I would like to reveal about ‘Mismatch 2’ right now is that it’s a very engaging roller coaster ride. For the rest, you better be watching it. It’s about the naughty side of human relationships. Riya – My experience on working on this project was fantastic because of Soumik da. I followed my director’s instructions and he made it very easy for me to work on this project and to get along with my co-actors, Mainak and Rajdeep.

Riya – I’ve worked with a whole spectrum of actors throughout my career. Thus, I don’t find it very difficult to get along with my co-stars. Riya – I find web series more of a challenge because it’s shot over a more condensed timeframe, which means longer working hours everyday. I have to make sure my energy is constant throughout the day and additionally there are so many web series coming out that we need to put in a lot of efforts to make sure this really stands out.

Riya – Umm, I watch films more than web series but recently the number of web series I’ve been watching is increasing rapidly.

Riya – I’ve been fortunate enough to be casted as the lead heroine in my first Bengali web series. I’ve worked with Venkatesh Films before. Therefore they specifically had me in their mind for this project. 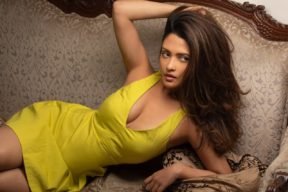 Riya – I’m very excited and I’ve always been open to working in Kolkata for good projects and this certainly is one of them.

Riya – Thank you! My pleasure.