1. Now we will be having you ( Madalina ) in Bollywood, so, how was the journey from an actor in stage plays to Hollywood and now, Bollywood?

I was tempted by acting ever since the middle school, when I took part in theater school festivals. At 20, I had to move to London because I was accepted to one of the best Meisner Technique acting schools. From there I got remarked by a manager and I have been signed by a theatrical agency.  I can say that I was lucky, because I got the chance to work in the industry straight away. In London, it is not an easy job to get a good agency to represent as an actor.

To be honest, entering Bollywood happened to me without purposely looking for this. When I found that I got the role, I read the script and loved it! If Dobaara would have been a copy of “Oculus”, I wouldn’t have accepted to do it. My character is the twist in the story and it doesn’t exist in the original.

2. You stole the limelight mainly from the time of “The Young Pope”. Would you like to share with us something interesting about that project?

I saw Jude for the first time when I was in the make-up room.  There were few changes of the script that the director Sorrentino made at the last moment and I was very engaged reading the new scenes.  Jude suggested that we should rehearse it together. After 10 minutes with him, I had forgotten I was speaking with a Hollywood A-list actor. Jude is very modest, very relaxed and natural. I think that is what makes him a great actor. He showed himself very available for readings of the scenes and discussing our character’s backstory.  I could immediately realize his passion for work and therefore his brilliance as an actor.

3. What happened after the television series? What I mean to say is you must have been offered many scripts. Therefore, how was the feeling and how did you choose a particular script? Is there any such formula for choosing one?

I am actually now shooting for another popular TV series, this time for Italian television only. Even if after the success of “The Young Pope”, other Hollywood projects have been offered to me, my manager couldn’t get my dates available. I am reading few scripts. One coming from Bollywood as well , but unfortunately I cannot reveal more.

4. Working with Prawal Raman and a debuting in a different  industry, how was your experience by stepping in B-Town & on the sets of ‘Dobaara’?

For me, it is the script that matters and not where it is from. I find it no way different whether it’s Hollywood or Bollywood. I loved working with Prawaal Raman. Before I  accepted the role for Dobaara, I have looked into the director’s previous work. I have  watched “404” and “Main aur Charles”; only then I decided to be in this film. Prawaal has a very international way of doing his films. His films are very different than the typical Bollywood films.

5. Your teacher motivated you for pursuing acting as your career. Did you have any interest in that from before and whom do u consider as your inspiration behins your success?

Yes, I got to act for the first time in school and I took part to the first stage shows. My mother has always been  my model in life and even if she is not in the artistic field, I admire her ambition and devotion for work. She is a perfect career woman, mother and wife. She is managing to do all that. Therefore my effort towards my career right now are driven by my admiration for her being.

6. From stage plays to working with Jude Law and so many other projects, did you keep Bollywood in your wish-list or did it happen just like that?

It’s more like Bollywood chose me 🙂 I auditioned for the role in London and as I have mentioned before,  only after reading the script I decided to accept it.

7. What do you like to do other than acting? What about your hobbies?

Before acting I have been into dancing for 8 years. So I am still passionate about it. I like to go and dance or learn a new choreograph every time I get the chance. I go to gym regularly. I love travelling as well because right now I am living between London-Rome and Mumbai .

8. Not much is known about your personal life. Do you intentionally keep it a secret or is it just like that, unintentionally a silent one?

I am a very private person when it’s about my personal life.  I don’t share much. From my social media this can aspect can be noticeable . I don’t like to share or post every time to say where I am or where I go out. I only share about my work; photos on set, photos from events, thoughts etc

9. What are your upcoming projects?

I have a feature film, where I shoot as a lead that is  due to come out soon in cinemas in Italy. At the moment, the film is in post production. I am also finishing the shoot for the Italian TV series until June. From June onward, I am looking to do another film so as I have mentioned before, I am reading few scripts. My manager will be discussing the offers and I will decide soon which project to choose.

10. Are you going to learn more languages in future?

I am currently learning Hindi. It’s the 6th language that I will be speaking.

11. What message would you give to your fans?

I would encourage my fans to go to the cinema to watch Dobaara on the 2nd of June and to keep following my activity on social media, that’s where I post about my shoots, past and future projects.

12. Will you like to give a message for LaughaLaughi?

Keep up the good work! 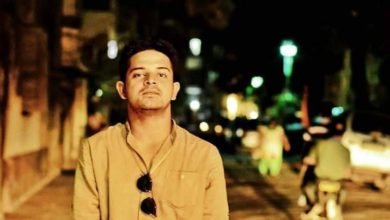 Happy moments to remember with Rahul!