• First of all a big congratulations ma’am! Bokul Kotha has crossed more than 450 episodes and still ruling the hearts of everyone.
~ Thank you so much. Thanks to all the audience and to those who are reading this right now. Without your support we wouldn’t have able to cross so many episodes and soon we’ll complete 500 episodes. So thanks to all.

• From day 1 till today what u think, How much Ushasi herself has evolved in the process of being Bokul?
~ Bokul is like a girl next door and that’s why people can connect to her so well. So I never had to give much efforts for being Bokul. Initially she used to be a tomboyish girl bt now day by day she is becoming more like Ushasi. 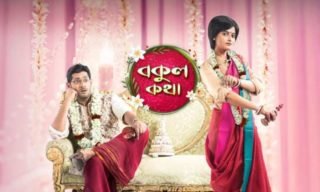 • Bokul is a humble childish naughty tomboyish kind of a girl. How much is Ushasi similar to her?
~ Umm I don’t have much similarities with Bokul. She can ride a bike, she’s the first to raise her protest against any misdeeds, she alone can fight with gundas. But I’m not that much brave. But yes, the way Bokul gives her family the most priority and loves to stay with everyone, I’m much like that.

• The very thought of the term actress gives us the image of a fashionable girl with long hairs, fashionable dress and all. But Bokul is exactly opposite. Initially what made you opt for this role?
~ Actually it’s the getup and dressing sense of Bokul that attracted me to opt for this role. As you said, we think of a fashionable good looking girl when it comes to the female protagonist of a serial. But Bokul don’t even know how to dress or how to look good. And that’s the first thing to attract me. Moreover as Bokul has a no-makeup kind of look, I get much late call times than others and that’s a relief for me(laughs). 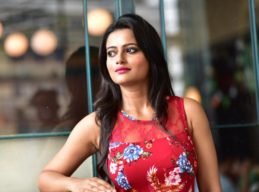 • How much challenging was the role to you?
~ When I gave my auditions for this role, I thought it was really challenging because I had no idea how to portray her body language who ride bikes, climbs up the trees, roams around the streets. But as the shooting began, it came instantly. I never had to do much research and workshops for this role. I kept it the way I am and audience accepted it that way.

• How much your life changed after Bokul Kotha?
~ Yes life is definitely changing. Previously 5 among 10 people would recognise me. But now whenever I go out everyone comes running to me and get excited for clicking selfies and all. It feels so good. Their love repays my hardwork. • Do you remember any special moment from your first day shoot of this serial?
~ First day shoot reminds me of one thing. First day when I came for the shoot, I got ready and had to wait for a long time. But ultimately I had no shoot that day and we packed up. I got worried thinking that it’s not a good sign for the beginning of my project but after that everything turned out well.

• How you spent time in the set during off time?
~ We never get such off times because we have a packed schedule and we try to finish it early. But yes if sometimes I get a little off time, I watch Netflix or read a book. And if I get a companion then obviously we kill time by chatting.

• You said u watch Netflix in off time. So r u a Netflix freak? What’s the last one u have watched?
~ Yes you can call me a Netflix addict. Ummm the last one I watched is ‘Black Mirror’.

• Name someone from team Bokul kotha whom you would like to give these tags. (You can’t use one name twice)
1. Selfie partner- Mallika Di (Kakimoni)
2. Problem solver- Soumen Da (Director)
3. Feels like home- Saswati aunty (Rishi’s Ma) and Anuradha aunty (Thammi)
4. Annoying- There are many but can’t take their names
5. Partner in crime- Arpita Di (Boudi bhai) and Shreyasee (Rishi’s elder sister)
6. 3 a.m. friend- Sohini Sanyal (Maa)

• Any message for your fans?
~ Keep watching Bokul Kotha. Keep blessing me and keep supporting me. Love you all. 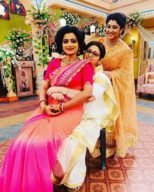 • Any message for team LaughaLaughi?
~ Thank you so much LaughaLaughi for giving me this opportunity of this interview. I hope to give you more such interviews in future. Thank you.

• Thank you so much ma’am for giving us time from your busy schedule. All the best for Bokul Kotha.
~ My pleasure.