Skip to content
The Kota Factory boy Vaibha Pandey-Mayur More, says…
•So firstly I will begin by asking you on how was the journey from being a mass media student to an actor?
Well, I started doing mass media because I wanted to make films and be a part of different projects related to it. Before mass-media, I was doing B.Com but I was not good in Maths and therefore I changed my course the next year. My first camera experience was during my mass-media course, as we made a short film and I acted in it. So, that’s how it all started.
•How did the offer to play the lead in Kota Factory come to you?
I got an audition call for the Kota Factory, I went and gave my shot and the director must have liked it. I got a return call and had meetings thereafter with the writer and the director on describing how they have planned things. That’s how Kota factory happened to me via auditions.
•What is your take on such a hit response of Kota Factory?
Ya, you feel nice when you get such a great great response. We were sure this will work but we did not expect such a massive response that we got. You know you are working so hard as well as the crew members for this project and  then such response makes us feel super happy. More than anything else, I feel happy that the people are connecting with the characters of the series.
• In real life are you similar to your reel character “Vaibhav”? If yes, how?
Whenever you play a character, there are similarities say 50% and the rest you get to know from the outer world. The major difference between Vaibhav Pandey and Mayur More is, Vaibhav loved studying and I never did. I love reading books though but not studies (laughs).
• Which was your favourite scene from the series Kota Factory?
I have many favourite scenes from the series but would like to mention one. The scene of me helping Vartika (Revathi) in studies, visiting her place does have a connectivity with my real life. When I was a student, I was not good at studies so my then crush helped me a lot to get in through. Bas yaha pe mai padha raha tha aur mere real life mei koii Vartika mujhe padhaya karti thi(Laughs). • What was your pass time at the set during the shoot?
My pass time  was nothing but sleeping(laughs). Kabhi kabhi bahar nikal jata tha Kota mei ghumne.
• How was it working with Raghav Subbu?
I had so much fun working with Raghav. When you know what your director wants from you, it becomes easier for you to work accordingly and you feel motivated. It was my first time to work with Raghav but the best thing about him was, he was always open for suggestions and always gave space to us. Raghav Subbu is a fantastic director and I would love to work with him again and again.
•Do you think there is a lot more changes required in Indian education system?
Seriously, I have no idea about Indian education system (laughs) but yes education is important for kids. Am sure the kind of education we are getting right now is only focused on ranks and grades. I wish Indian education system gets more and more teachers like ‘Jeetu Bhaiyya’, who are able to understand the students other than teaching only. If students are not enjoying studying then there is no point. 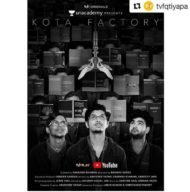 • If not acting what was your alternate career choice?
I have seriously no idea. However, I love clicking pictures and cameras so, I guess photography would have been the alternative career.
• How are you keeping up with the increasing fan following of yours?
This is the first time both me and my phone are getting so much attention (laughs). It feels great, both my phone and me are trying to adjust with it and loving it.
• Where do you want to see yourself in the coming 5 years?
I have not thought about it because I love to live in present but yes, I want to be a part of many more good stories.I  want to explore my self as an actor and want to be good at it so that I can entertain all you guys.
•Lastly would ask you to give a message for all the followers of LaughaLaughi.
LaughaLaughi is such a cool name. I give all my love to all the readers and listeners and want them to be happy because if you laugh you’ll be happy so follow LaughaLaughi. Keep laughing and thank you so much for all the love and attention.
-Atrisa Dutta
Journalist at LaughaLaughi
Facebook Comments Box