First of all thank you Veera for joining with us, so how are you doing?

‎~ Thank you guys for having me! I’m doing good, thank you. ?

‎~ Haha! (laughs) Yes hunter was my debut film, my character however, wasn’t very sensual. Hahaha! (laughs) I’m supposed to be a young naive girl. Basically I did a short film with Radhika Apte and at the success party of that film, she mentioned to me that someone she knew was looking for an actor who could swim. Then I felt that I’m suitable for the look. She said they would call me for the audition. But the call didn’t come and I forgot about it.

Then, after about 6 months, I got a call, when I had completely forgotten all about it and thought it was a prank. After hanging up once, they called me back later and I went for the audition on next day. I gave my first ever audition and it went pretty well. I finished it up and by the time I reached to the lobby of the building, I got a call asking me to come up on the next day to read the script with Gulshan, the hero of that film and that’s how it happened! I had lost 15 kilos weight for the film and I had to do diving training and learn how to swim and do tumble turns under water like a professional. It was mad fun!

‎~ I had a great interest in archaeology and I also studied it for a while. But at the same time, I wasn’t one of the people who will ever say, “I never planned for this. It just happened”. I have known I wanted to act since my childhood. Ever since I could understand  what is a TV or a film, I wanted to do it. I can remember that I watched movies in theaters and coming out envious about the people who were a part of that film. So I planned to do this all along. While I had planned to act I knew that, how it happens is not in your hands. So I just went with the flow of things.

‎~ As I said earlier, I was just attracted by films in general, even before I could understand what my dad did for a living. Of course having him in the film industry gave me a feeling that it will be easier for me. On the other hand, seeing his life taught me that this industry is in no way an easy one. I have seen him struggling for years and I have seen him coming home injured and cut up and bleeding, I have stayed by him in the hospital bed during multiple surgeries. So I had no illusions of this industry being only glamorous and glittery. I knew it’s tough and that knowledge came to me by observing dad. It  was my own interest that kept me going and then after talking to dad, he told me that he owes everything he is and has to be in this industry. He speaks of it very highly. To him, the Hindi film industry is a big family.

‎~  In my free time, I practice singing. I do work out and I love to swim. I also do a lot of cooking and I try to spend as much time as I can with family.

‎~ Ohhh! This theater and movie debate! Hahah! (laughs) So strangely, I did my first feature film before doing my first play. I have done a lot of theater in Hindi, English and Marathi. I’m currently working in a Marathi play. But, I think I’m most comfortable in front of the camera. Theater gives me a little stage fright which is something I’m yet to overcome. Hahaha! (laughs)

‎~ My list of directors and actors I want to work with is very very long right now.

‎~ Ya, this is true. Until now, I’ve been  doing a lot of theater as I said earlier. I was working on Disney’s “Beauty and The Beast” for a year. It was a broadway style show with live singing, etc. I had lots of fun there! I’ve also been working on recording music and doing a lot of voice work. I just finished shooting for a short film and I’m looking at a few more projects right now. So hopefully you will see a lot more of me in this year. ?

‎~  Keep doing what you are doing as much as possible, encourage new and budding talents! Cheers guys and thank you so much!

Wishing you all the best from our entire team for your future, thank you! 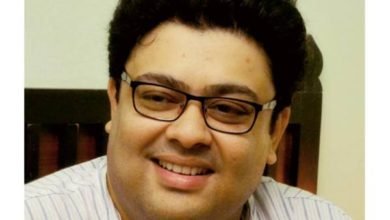 A wonderful conversation with Ajay Sathyan!