Satyarup was bestowed with this prestigious title after completing the feat by reaching the summit of Mt. Sidley in Antarctica, on 15th January 2019 at 10:10pm Chile time.

When being asked about his feelings after getting the Guinness World Record certificate in hand, the record holder Satyarup said, “I felt really happy and excited after receiving the certificate in hand. I would say getting my name registered in Guinness was difficult than climbing itself.

Guinness is very stringent about approvals and I had to submit more than 200 artifacts in support of my claims. It was a mammoth task as the Summit videos and pictures weren’t enough as evidences and I had to provide minutest details from gps log for the whole expedition to witness statements from co-climbers. Since it was hard earned, I felt excited after getting the certificate.”

We asked him how and with whom he celebrated this achievement after getting in hand the certificate. Satyarup told us that he had ordered multiple copies of the certificate paying extra charges and kept one copy for himself, one for his parents and the other for his close friend Dipanjan,who helped him to consolidate his proofs to file the application.

Satyarup added, “Dipanjan wanted to keep a copy of the certificate as a memoir. He is my neighbor and I went to his house at 1 am and finally celebrated the moment opening a champagne.”

Satyarup’s life changed a lot after getting bestowed with this honourable title. “To be honest, never ever in my wildest dreams I aspired to have my name registered in Guinness. As a kid I used to see the show in tv and used to think it as a fairy tale”, said Satyarup. He also added, “A dear friend Bhaswati di sent me a link last June sharing the record of Daniel bull who was then the youngest to climb the 7 summits and 7 volcanic summits.

I realised I was a strong contender as according to my plan I would be almost 8-9 months younger to break that record.” Satyarup aspires to bring more laurels for our country and uplift adventure sports for India in the world arena. 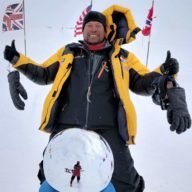 Satyarup’s next target is to ski the last degree to North Pole next year again as his last expedition was cancelled in lieu of the political situation between Russia and Ukraine.