Ans. In my college days, I used to perform in my college fests and other programs. Apart from that it has been exact 23 years and 10 months since I started singing.

Ans. It was initiated in the year of 1992 on 24th August. Once I was listening to an English rock music which I loved.  That was the time when the idea of forming a Bengali rock band struck my mind. I thought that rock music is a musical genre. So why don’t we try to implement it by using our own mother tongue. Hence, we formed Cactus.

Ans. We wanted to compile the English rock music and Bengali language. So we thought of finding a word which is English but also used frequently in Bengali language. Another reason of picking this name is, the lyrics of rock music have a depth. They are all rounder… sometimes it is about emotion, sometimes about revolution. So it has to be loud enough to be fit in any situation. Just like the plant Cactus… We all know that cactus can survive in a very tough climate too.

Ans. I get inspired by the nature. Other than that, there are Pink Floyd, MJ’s music, R D Barman’s songs to inspire me. 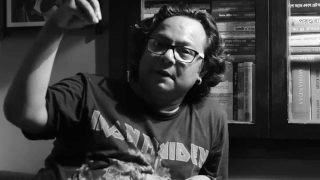 Ans. No definitely not.

Ans. I don’t think that Cactus’s songs have lost their value. There are so many people who still are in love with Cactus songs. But yes, the craze… the madness is missing like it used to be in previous days. Actually it is a matter of trend. These things are a part of it.

Ans. Definitely. Jibanananda Das is one of my favourite poets and to be more precise, an inspiration. His writing styles and languages always inspired me not only as a human being but also as a writer. I use to read his poems again and again.

Ans. I was a kid when I had the 1st stage performance of my life. That was my school’s program and it was a group performance.

Ans. It was a very good experience. When I heard that Kabir Suman and other music directors are also being a part of it, I told Srijit (Srijit Mukherjee) that he already has the best musicians of all the time with him, hence I have nothing to do there. But he said that he wants me to compose two songs of the movie. So, I went to the studio, performed 7-8 compositions of mine there and among them he liked “Singho Rashi” and “Jhaaj”.