~ Well, I’ve been acting all my life, since I was in school. And I’ve been a professional for some 42 years now.

~ Of course I feel very fortunate to be in the industry for this long. Yeah, things have changed as the society has changed, people’s likes and dislikes have changed. Technology has obviously played a very important role. It has opened up different avenues to share your content, like the television and the web, apart from the screens. Things were not the same when I came into the industry. We had a single-screen format, there wasn’t the television even. I’ve seen the TV, the webseries and everything happening front of my eyes. And that’s really exciting, you know.

~ See, acting is acting whether you put it on stage or on screen. Yeah, the techniques obviously differ as the requirements of the two mediums are different. Theatre demands a lot of practice as all of it happens on one go. Whereas, cinema needs a lot discipline, which is harder, I feel. A scene may be shot halfway through the film and you do not get to know the head or tail of the story. There are cuts and changes. You have to repeat scenes but with variations.

~ The first and the best thing that happened with Buniyaadwas that people began to put a name to my face. And this entire credit goes to Ramesh Sippy and the producers. At the end of each episode they used to show all of our names with our faces. That helped a lot. People started to recognize the artists and not just the characters. I don’t see that happening any longer.

~ They are a lot more courageous, I must say. They know how to take risks. Look at Bahubali, I think it has been a pathbreaking experience for Indian cinema.

~ Nah! I haven’t really thought about it. May be I would love more to sing my own songs on screen.

~ The East Enders for BBC was a learning curve for me. The industry there is well-oiled and has made me a lot more disciplined.

~ In Dasdev, my character is that of a cunning manipulator. It’s dark in many ways but it’s very interesting.

~ The word itself is an ugly term I think. I’m totally against it. Now take a jeweler for example, most of the timetheir sons join the family business, led and supported by their fathers. So the same thing happens here. When a family is involved in the film industry for decades the senior members would obviously guide the juniors when he/she is stepping into the showbiz. I find this as something very natural. Moreover, a jeweler gets his chances to groom himself but for an actor, as they say, once the curtain goes up, there’s no mummy, daddy or uncle to help you. It’s your equation with the mass then.

~ Yes of course. In fact I’m already a part of Umeed. It’s a project dealing with illegal drug testing on children or people for pharmaceutical benefits. It’s a very strong social issue and I think this has not been addressed yet. Umeedwould be releasing soon.

~ Only thing I can say is be persistent, committed and honest to whatever you do. 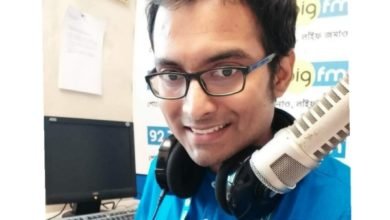