After the success of Redmi Note 3, Xiaomi has finally launched its successor Redmi Note 4 in India today(19th January, 2017). It was lunched in Delhi by Hugo Barra, the international Vice President of Xiaomi. Xiaomi organised a live stream on YouTube of its launch event. The rear of the Redmi Note 4 is a bit different though, featuring design contours more reminiscent of the Mi5. There are fine antenna bands running across the top and bottom. The rear camera, dual-tone LED flash and fingerprint scanner are set up much the same as on the Redmi Note 3. One of the few differences between the two is that this time around Xiaomi has shifted the speaker grilles from the rear to the bottom. The bottom also houses a Micro-USB port for charging and data transfers, while the top packs a 3.5mm audio jack and an infrared (IR) emitter. The power and volume buttons are placed on the right, and can easily be accessed with fingers.

At 8.3mm, the Xiaomi Redmi Note 4 is slimmer than its predecessor, and just one gram heavier. We had no problem using the handset with just one hand. The rounded edges of the Redmi Note 4 actually fit well in palm without causing any discomfort when used for long periods. When it comes to design, the Redmi Note 4 can be considered the best Redmi smartphone so far. It was launched in China in Dark Grey, and Gold, though Grey seems to have been replaced with an exclusive Matte Black option in India. We received a Gold unit for review.

The 5.5-inch full-HD IPS display has a resolution of 1080×1920 pixels, which works out to a density of 401ppi. Thanks to the full-HD resolution, text and images appear razor sharp. The Xiaomi Redmi Note 4 display offers punchy colours and decent viewing angles, while sunlight legibility is also great. The screen size makes the Redmi Note 4 well suited to watching videos and movies. You can adjust the colour temperature from the Settings app. A Reading Mode makes the display more comfortable to use while reading. 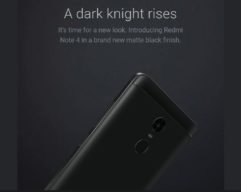 This time Xiaomi has replaced Silver color with Black.

The handset has a hybrid SIM tray which supports one Nano-SIM and one Micro-SIM or a microSD card. Xiaomi notes that both SIM cards support 3G and 4G networks. The company has definitely taken note of complaints of the Redmi Note 3’s 32GB microSD capacity limit. The Redmi Note 4 supports microSD cards of up to 128GB which should be sufficient for most people.

Xiaomi Redmi Note 4 has a non-removable 4100mAh battery which is marginally bigger than the 4050mAh one seen on the Redmi Note 3. There’s a 13-megapixel rear camera with f/2.0 aperture, PDAF (phase detection autofocus), and a dual-tone LED flash. There is also a 5-megapixel front-facing camera with f/2.0 aperture and a fixed-focus lens. Users also get dual-band Wi-Fi 802.11a/b/g/n, Bluetooth 4.1, USB OTG, FM radio, GPS/ A-GPS, Miracast, GLONASS, and BeiDou. Much like its predecessor, the Redmi Note 4 also gives NFC connectivity a miss. 4G and VoLTE are supported, and we were happy with call quality.

The Redmi Note 4 runs MIUI 8 based on Android 6.0.1 Marshmallow. Xiaomi has added plenty of new features including Now on Tap which was one of the highlights of Android Marshmallow, introduced in 2015. Google’s Now on Tap can be triggered within any app just by long-pressing the Home button, and can use what’s on screen as context for your searches. MIUI 8 on the Redmi Note 4 looks light and polished compared to previous versions. We were impressed with the system animations, which look refreshing, including a neat one when you uninstall an app.

MIUI 8 comes with a new Gallery app that automatically syncs stored photos on the device with Mi Cloud. Users get 5GB of free cloud storage on signing up for an account. The Gallery app now comes with video editing and sharing features.

The Quick Ball feature, which was first seen on the Mi Max, is available on the Redmi Note 4 as well. This is a hovering button that stays on the screen at all times, including on the lock screen, and lets users define up to five shortcuts for easy access.

With privacy in mind, the Redmi Note 4 offers Dual Apps and Second Space, two of our favourite software features. The Dual Apps feature, as the name suggests, creates two instances of any app on the same smartphone, so you can, for example, use two WhatsApp accounts at the same time. Second Space, on the other hand, lets users separate business and personal data on the same phone. The feature lets users use two entirely separate Google accounts.

Another highlight of the software is scrolling screenshots, which lets users take screenshots of entire Web pages. Xiaomi has also worked on its dialler app which is now light and easy to use. MIUI 8 brings a caller ID feature to the Redmi Note 4, which eliminates the need for third-party apps such as Truecaller. The Messages app has also received some much-needed tweaks in the latest version, such as the ability to bundle similar messages into folders. In our case, texts received from banks, food chains and other services were moved into one folder, which was helpful in prioritising what to check first. The preloaded Themes app offers plenty of options for wallpapers, ringtones, and icons.

Xiaomi has also included a one-handed mode, which basically shrinks the display to one side of the screen and lets users select effective screen sizes – 3.5, 4, and 4.5 inches.

The Xiaomi Redmi Note 4 has plenty of preloaded apps including Security, Compass, Scanner, Recorder, Feedback, Mi Picks, Mi Community, Mi Remote, Music, Mi Store, Weather, and a default browser. Unfortunately, there is no way to uninstall the preloaded Xiaomi apps. We feel that Xiaomi should reduce the number of preloaded apps on its future devices or at least offer the option to uninstall some of them.

Xiaomi upgraded the 5.5″ 1080p IPS screen to one that promises 450nits of brightness and 72% coverage of NTSC colors. For the Note 3 it boasted “pixel-level dynamic contrast” yet the phone scored less than 1,000:1 contrast.  The Redmi Note 4 hits its target brightness, which is slightly higher than Note 3’s. Thanks to improved black levels, however, contrast is now over 1,100:1. It has a resolution of 1080 x 1920px and a pixel density of 401 ppi. There’s an Increased contrast mode, but that only changes the dynamic contrast on a per-image basis. It still makes photos look punchier and doesn’t affect color accuracy. Automatic brightness is available, but it doesn’t boost the screen – 440nits is the highest you get.The high reflectivity of the screen prevents it from being very legible under bright sunlight. It scores a bit lower than even the Redmi Note 3, despite being slightly brighter. This time Redmi Note 4 provides 2.5D Curved Glass protection.

The Xiaomi Redmi Note 4 is a sometimes dual-SIM phone – it really depends on whether you need extra storage. Which you most likely do, with the 16GB model.

If you do have two SIMs, it’s a toggle in the settings that flips which cards provides data over LTE. The phone supports all necessary 3G and 4G tech for the three major carriers in China. VoLTE is supported, soon it will replace 2G voice in busy city centers as it supports many more calls per cell.

The IR blaster gives the Redmi Note 4 control over your equipment at home – including things like cameras (some DSLRs have IR remotes), fans (Xiaomi makes a smart fan, believe it or not) and others. That being said, the camera optics of the Redmi Note 4 have changed. It now comes with a 13 MP snapper on the back instead of the 16 MP sensor on the Redmi Note 3.

The Xiaomi Redmi Note 4 comes with a 13 MP camera on the back. It is assisted by a dual tone dual LED flash. The rear camera comes with an f/2.0 aperture and Phase Detection Autofocus, similar to what we’ve seen on the Redmi Note 3. It supports full HD (1080p) video recording at 30 frames per second. It comes with a lot of modes and filters as well. On the front, the phone comes with a 5 MP camera with the same f/2.0 aperture.

Pricing of the variants

From 23rd January Redmi Note 4 will be exclusively sold on Flipkart and Mi.com. The Redmi Note 4 is a great package with the only downsides being its hybrid SIM slot, lack of quick charging, and excess of preloaded apps. We think that the Redmi Note 4 will provide tough competition to other smartphones in its price segment, and even some priced a little higher. It scores very well in terms of design, battery life, and performance. For those who are looking for a smartphone with a big screen and great battery performance on a budget, the Redmi Note 4 is easy to recommend.

Hi, I am Nilanjan. I am a content writer of LaughaLaughi. I am a Musician and a YouTuber also. I am very eager to read books. I have a great attraction towards the Technology.