Karnasuvarna was the capital of Gauda Kingdom during the time of Shashanka, the first important king of ancient Bengal who ruled in the 7th century. Between the fall of the Gupta dynasty and the rise of Shashanka, a number of independent rulers emerged in Bengal. There were Prabhakarvardhan and Harshavardhan of Kannauj, king of Maukhari, Bhaskaravarma of Assam, Pulkeshi ll in South India. All of whom emerged as one of the driving forces of politics. At that time, an independent emperor appeared in Bengal who established an independent state and expanded his kingdom by his own glory. He was Shashanka – the first historically recognized emperor of Bengal. In the 7th century AD, he formed the kingdom of Gaur by uniting the small kingdoms of Bengal. 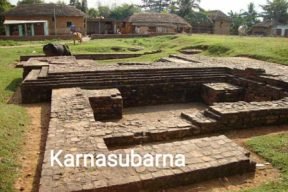 Karnasuvarna became the first capital of independent united Bengal. It is located at Kansona village near the present Rajbaridanga in the present Murshidabad district. Shashanka started ‘Bangabda’ by ascending the throne. The famous Chinese traveler Xuanzang mentioned in his travelogues about Mahavihara. According to him, an important centre of learning of Vajrayana Buddhism was found near Karnasuvarna. Chinese traveler Hiuen-tsang, referred Karnasuvarna as Kilonsuflon. According to his description, the inhabitants were wealthy. Multiple religious communities lived here. However, Hiuen-tsang, who received Harshavardhana’s patronage, had a deep bias towards Shashanka. Banabhatta, the poet of Harshavardhana. He expressed his hatred towards Shashanka by using such as ‘Gauradham’. Nevertheless next to Karnasuvarna was the site of famous Raktamrittika Mahavihara. There were also several Buddhist monasteries and temples inside the city.

It is rumored that Karnasuvarna was the capital of the ‘Anga’ kingdom which Duryodhana gave to Karna, the first born son of Kunti. That is why this place had been named as ” Karnasuvarna ” ( Meaning made beautiful by Karna). It is also believed that Shashanka ruled the kingdom for some time under the Gaur king of Karnasuvarna as the Mahasamanta of Rohtasgarh. The Gaur king of Karnasuvarna was probably a representative of the Maukhari dynasty. After the Gupta period and before the Pala period, Karnasuvarna became the political center of East India. Excavations at Rajbaridanga in Rangamati village of Murshidabad have uncovered the ruins of an ancient Buddhist monastery. According to the researchers, this was the Raktamrittika Mahavihara. 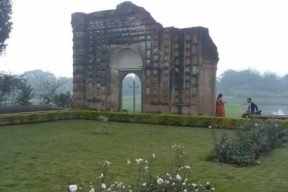 Karnasuvarna was the onlooker of several historical changes. Thaneswar king Harshavardhana, Kamrup king Bhaskaravarman and several other rulers wanted to capture the capital of Shashanka. After the death of Shashanka, his son Manabdev ruled Gaur for several months. Then at this point Harshavardhana and Bhaskaravarman captured Gaur and successfully subjugated Karnasuvarna. After this, when more than one king tried to occupy this region, chaotic situation was established. This situation was spread to the whole of Bengal, and an extremely chaotic situation started in Bengal. In the historical language it is known as ‘Matsanya’. After the death of Shashanka, who took Bengal to the top of his fame, it faded away.