INTRODUCTION: “The Family Man” is an Indian action drama web television series, which is created by Raj Nidimoru and Krishna DK. As because the main plot is about terrorist attack in India, the entire series is enthralling. IMDb has been given this series 8.6 out of 10. • Here we see that Manoj Bajpayee is the protagonist who stops the terrorist attack with his team from happening.

• He not only spies the attackers but also gives an eye to his family to know what’s exactly they are going in their life.

• Here even we find Manoj Bajpayee as a family man, homely person. Plot: What if the family man becomes a dedicated intelligence agent too?

Directed by Raj and D.K “The Family Man” gives us enthusiasm to spare our 8 hours for two reasons; firstly the dedication towards country, the determination to keep our country safe from the attackers and secondly the dialogues Manoj Bajpayee has applied throughout all the episodes.

Here you can see that Srikant Tiwari (Manoj Bajpayee) is the protagonist and he is an undercover intelligence agent who works for a special cell of the National Intelligence Agency of India. He is a responsible officer who is respected by his juniors and friends too. Apart from that if you differentiate his profession from his personal life you will see that he is a family man too who has a huge responsibility of his wife with his two children. “Simplicity becomes evaporate when you have the power” but here you can find him as an ordinary person who completes yoga in the morning and returns home with a bag of vegetables bought from market. Even he applies for a home loan just because his family can live satisfyingly. Fun part begins when he uses his weapon, undeniable lies to control the present situation. Pakistan is still our enemy. Each day, each hour Srikant like officers even give up their life just to keep their country safe.

When sometimes the family man remains busy at spying and capturing the terrorists, his wife Suchitra Tiwari (Priyamani) takes care of their children single for their bright future. 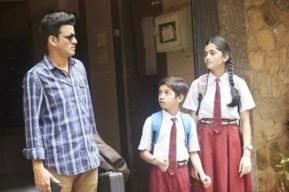 There should be some suspense remain in your thought “what happened then? They will stop the terror attack from happening or not?”

“How will Srikant tell a lie to save his back? ”

“How controversially do the attackers set a plan to destroy lives? ”

If you are a suspense thriller lover you can definitely give it a watch.

You can also read: Riders To The Sea by J.M. Synge: A Review

And after completing rate this series through a comment in this blog and leave the comment below.