After keeping their fans guessing for a long time now, the much awaited trailer of the film ‘Judgementall Hai Kya’ starring Kangana Ranaut and Rajkummar Rao is released, filled with intense mystery this film is going to take you on a fun filled crazy ride.

The trailer starts off with the basic premise of the film: there has been a murder and there are two suspects.
Both have confused the cops and neither can be charged. Then we are introduced to the two prime suspects a.k.a the two main leads of the film.
First, Bobby played by Kangana described in the voiceover as ‘atrangi’ but something is bit strange while Rajkumar Rao essays the character Keshav. 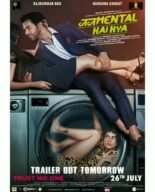 The film ‘Judgementall Hai Kya’ has faced controversies and was in the headlines since the time it was announced. Initially it was titled ‘Mental hai kya’ which was criticised by the members of the Indian Psychiatric Society (IPS) then they wrote a letter to the Central Board of Film Certification (CBFC) seeking a change. The film, directed by Prakash Kovelamudi and produced by Ekta Kapoor, is scheduled to release on July 26.

After impressing the audience with their chemistry in ‘Queen’, Kangana and Rajkummar Rao is definitely going to treat their fans with their different style and drama. Don’t believe me? Go and watch the trailer now. The intense mystery of the trailer is making me feel to watch the movie. Also, the latest poster is more peculiar and catchy, Kangana Ranaut is spinning in a washing machine as Rajkummar Rao romances on it with his girlfriend.