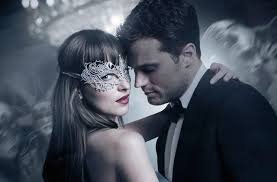 He introduces her to this world. The first part is mainly focused on the formation of a newly budding relationship between them. The second part ‘Fifty shades Darker’ is showing that their relationship is actually growing up towards a serious one. Here Christian is seen to put extra effort in the relationship other than secual relationship. The third part, the ‘Fifty shades Freed’ depicts their marriage and how they handle each other by the means of understanding. This part shows how Christian falls in love with Ana in a stronger and permanent way.

There are a sort of unfolding of  layers of Christian’s psyche. The complexity of his character is skillfully portrayed by James. In the first part while Ana seems to be the girl-next-door who finds Christian intimidating but then realises the degree of his complex sight. The author tries to depict a love story in the foil of BDSM theme. As a romantic love story,  it is good but the vivid usage of sexual scenes are sometimes overflowing, it feels as if the author is putting it everywhere. In the first part Christian seems to be depending on Ana only because of sex but the beginning of the second part is actually underlined his strong feeling towards her.

The author tries to put a lot more emotional connection in this second part. Though sometimes it feels as if the heroine is liable to take all the responsibilities and problems. James does a good job when it comes to showcasing the inner conflicts of the protagonist. In the third part they het married but their conflicts remain alive.

The author has made them overflowing with problems but she also beautifully penned the deep understanding between them. The techniques of telling a story is impressive but the unnecessary details of physical relationships make the novel longer and much more complicated than it is supposed to be…

This trilogy is exciting, it is as if we are reading a teenage love story but the unnecessary sex descriptions makes it repetitive and boring some times. Also there is like a lot of complexity in the hero, so it sometimes feel too much to take. But overall it has the nice touch of vivid description by James. Also the quality to pen down in the imagination of the readers is something Janes uses in this trilogy a lot.