The story of Dushyanta and Shakuntala appears in the Mahabharata and Kalidasa’s play. The play of Kalidasa ‘Abhijnanashakuntalam’ is a treasure of Sanskrit literature.

Miranda was the only woman character in the play ‘The Tempest’ written by Shakespeare. When the play opened Miranda was almost fifteen and for the previous twelve years, she had lived on the island and was familiar only to Prospero and Caliban. Prospero was her father and the rightful duke of Milan. Caliban was not honoured with a human shape. Prospero called him ‘thou tortoise’. Trinculo stumbling upon him described him thus, “A strange fish….legged like a man! and his fins like arms!” He “smells like a fish.” 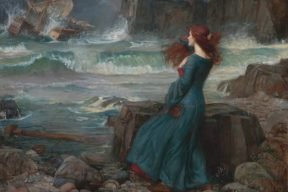 Miranda was unaware of the evils of the world as she was banished in the island with her father at the age of three years. She was a pure child of Nature like Wordsworth’s Lucy. She was very soft and kind hearted.The suffering of the ship wrecked party melted her heart. When Fardinand came to her island and saw her, they fell in love with each other.

Enjoy reading : How emotional infection can be avoided?