Saat No. Shanatan Sanyal Teaser Review – A thriller with multiple layers of symbolism

We live in an era where the definition of entertainment is constantly upgrading and changing itself. Having immense workload a large number of people get attracted towards web series nowadays.

Various digital platforms have come forward and promised to give the audience that extra dose of entertainment. ZEE5 is a well-known platform that brings a diverse collection of contents through different web series and original movies. This time they have brought another thriller movie that will make the audience glued to the screen.

Thriller and mystery are genres that have really worked for digital platforms so ZEE5 has come up a movie on similar lines. “Saat No. Shanatan Sanyal” is a ZEE5 original movie in Bengali and had premiered on 7th July 2019.

In the initial scene of the teaser, we see the protagonist standing beside a railway track and a running train reflects the shadow and light to reveal his dark presence. From this point onward, we can sense the undercurrent thrill and mystery building up. It perhaps signifies his various layers of mental state. Some are discovered while others remain unresolved.

The teaser shows the perfect amount of vision needed to guess the rest of the story. It can make the audience to anticipate the story line. It creates an ambiguous effect upon the audience’s mind and according to me, this will increase their attraction towards the movie. The teaser only gives hints and making it impossible to stay away from the whole movie. Neither a lot nor a less, the teaser will tease your mind in perfect balance.

Kaushik Ganguly has left his mark as a powerful actor over the past few years so his presence as the protagonist on screen will surely increase the expectations. He is famous for bringing the middle-class crisis or struggle on the screen. In this movie too, his role as Saat No. Shanatan Sanyal is of a typical middle-class man with financial problems ( as shown in the teaser). The various psychological layers that peek from the teaser has already set the audience’s expectation to the next level.

So what it feels to see the life of a conventional middle-class going completely unconventional? Shanatan Sanyal’s mental bewilderment when being rejected continuously at various workplaces, his desperate struggle to find a suitable proper job, his wife’s threat to leave him, his inner voice of right and wrong, his fear of being followed and finally the stain of blood – all these intricate plots merge completely with the mental turbulence of Shanatan Sanyal.

At the end of the teaser, when Shanatan Sanyal is asking if he can come in, is perhaps an indication of turbulence standing at everyone’s doorstep.

The ‘Aator’ or the scent seems to hold great symbolism in this movie. Apart from the scent, the movie is full of such symbols which depict the inner restlessness of the protagonist. 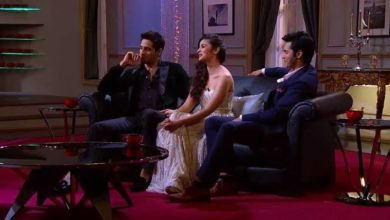 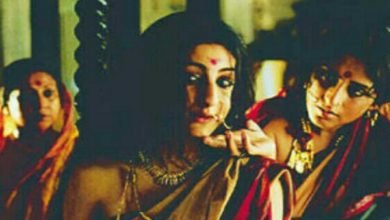