The Bengali film ‘Bishorjon’, recognized by the 64th National awards, is framed by the Kaushik Ganguly. The director proved himself to be one of the finest film makers in India, yet again!

The plot of the film ‘Bishorjon’ is grounded on a story about the sacrifice in love.

Abir Chatterjee, Jaya Ahasan, Lama and the director himself forms the principle star cast of the film.

Abir Chaterjee played the role of an Indian man who practice the import-export of things from India to Bangladesh and vice versa, in an illegal manner though.

Jaya Ahashan found Abir Chatterjee in a senseless state by the riverside during the time of the immersion of Devi Durga. The incident took place when the border was opened for access to people of both the countries.

Jaya played the role of a widow living with her father-in-law. She takes Abir to her house and promises to help him get back to India safely. She takes care of everything in spite of the fact that Abir is a stranger and protects him from everyone though Abir is believed to have trespassed the borders illegally.

She gradually starts finding her husband in Abir and at that very moment he came,he saw and conquered the heart of the woman without any kind of physical alluring. However, something that grabs our attention is the brilliant portrayal of one sided love and affection for Jaya by Kaushik Ganguly and he was flawless in his performance.

Jaya definitely loves Abir but she is bound to keep her promise as she knows that without Kaushik’s help, she would not have been able to take execute the plan and keep her word to Abir. So she prepares herself to marry Kaushik as he clearly loves her a lot and does every possible thing to take care of her and the family.

Kaushik Ganguly proved again that looks doesn’t matter and that he can easily mold himself according to the demands of a character and can stand in the lime light due to his profound acting capability.

It is, therefore, by all means, a must watch movie that is now being showcased in the theaters of the city of joy.

Highly emotional folks are requested to get some precautions and mental preparation before entering the hall. It might be a very embarrassing moment for u not being able to cage your tears in after watching the movie. 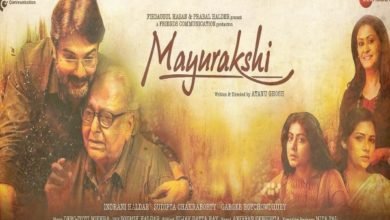