The story revolves around two cousins Apu (Rwitobroto Mukherjee) and Durga (Sauraseni Maitra) and Apu’s parents (Shantilal Mukherjee and Aparajita Auddy). Apu is a class 10 student preparing for boards exam and can be called a ‘Mumma’s boy’. His parents have a lot of aspirations regarding his future.

An engineering or medical degree, a high profile job, huge bank balance and an established social status- these are the things every parent demands from their child. Apu’s Mom & Dad are also not exceptional. In order to escape from the daily drudgery, Apu chooses music. His heart wishes to become a musician whereas his brain asks him to fulfill his parents’ dream.

Apu was doing well with his inner conflicts till his cousin, Durga comes to his house and changes his way of thinking.

Rwitobroto Mukherjee and Sauraseni Maitra proved their abilities as Apu and Durga. ‘Apu-Durga’ reminds us of Bibhutibhusan’s iconic characters. But coming out of that historic influence, Rwitobroto and Sauraseni proved their worth. The conflict between his heart and mind reflects in Rwitobroto’s expressions.

His depression, aggression and emotional outburst – every teenager will relate to it. Sauraseni Maitra is a strong girl with an uncompromising attitude towards life. She is effortless and captivating.

Aparajita Auddy as the overprotective mother and Shantilal Mukherjee as a hopeful middle class father are flawless.

Mainak Bhowmik with little moments of reality strived towards excellence. Sweet and sour bonding of cousins, broken family of Durga, over possessive and overprotective parents of Apu and teenage rebellion give the film the touch of reality.

With a relatable plot and strong narrative, ‘Generation Aami’ is the film every generation needs to watch. This film may help in bridging the gap between parents and child, at-least to a certain extent. “DEBI” – Set against the backdrop of this festive season. 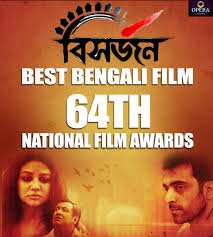