Compliments of the season folksiest and i hope you had a fabulous Christmas and a rocking NYE too! Now that we are in 2017, I was looking up some of the trends to know what could be the next-quirky-thing in eye makeup! It seems graphic eye makeup would be a big hit, so let’s take a look at what it is.

While most of the women i know off would love the cat eye and the winged eyeliner styles, it is time that the women in Calcutta made a quirky move to the eye makeup trends they use. For example, instead of going the boring way in doing eye makeup, why not amp up the look altogether with graphic eye makeup!

You can play it cool, trendy and hipster hippie or throw in more drama and boldness with the choice of shades and colors to play with. Check the fashion weeks abroad and watch what PYTs are up to, and emulate. Unless you experiment and emulate, you wouldn’t know what works and what doesn’t for you! 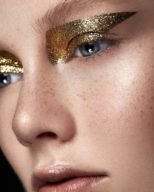 This is how it is done

With graphic eye makeup, one starts by placing a solid line on the top lash line first, and then extend it to the outer corner of the eyes.

Artsy arrows to blocked graphic styles, crease cut and blocked to the bold dimensions of cool shades too, in short, graphic eye makeup is haute and so trendy!

A couple of trends 2017 brings to you

The kohl and liner you have been using is so last century. Why do i say this? The picture below says it all.

When you aren’t sure how you feel

A look that breaks the norms of eye makeup application; i did mention about experimenting and visualising, didn’t i? 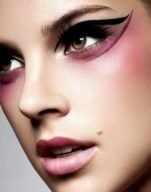 The patchy feathery touch is a trend to behold

If you have to quirk it up, here’s an idea for you to check and try!

When just a flick isn’t enough

And there are many more ways to doll up the eyes with a graphic touch. Please note, it is all about being creative and imaginative at the end of the day; the choices for the same are limitless and you don’t have to follow any norms.

Have fun and make an impression around, which talks about your sassy attitude the most!

A bohemian at heart, a wild child by nature, Rohan A H Noronha speaks to the soul and spirit of many through his writings. Quirky, incandescent and sometimes blunt yet polite, styling the less-fortunate and writing is a passion deep rooted and a second-self to the author. At the moment, a student of Cosmetology and Skin Aesthetics (Cidesco, Cibtac and ICL) at Christine Valmy School of Beauty, Kolkata.