Tarabai Bhonsle was an indomitable Maratha queen, a great worrier and medieval monarchs in the Indian history. She was the daughter-in-law of the great Chhatrapati Shivaji and the wife of Chhatrapati Rajaram Bhosle. After the death of his husband, her resistance power against Mughals, was praiseworthy. As her son Shivaji II was so young, she took the responsibilities of Maratha empire. Bhimsen (an officer in the Mughal army) mentioned that “Tarabai was a stronger ruler than her husband.”

Tarabai was the daughter of famous Maratha general Hambir Rao Mohite who belonged from Mohite clan. In 1700, after the death of Rajaram, Tarabai declared her son Shivaji II as inheritor and herself as next ruler of Maratha empire. Tarabai was a very skillful warrior. She was well-trained in sword fighting, archery, cavalry, military strategy, diplomacy and all other subjects of statecraft. Tarabai Bhosle is one of the few women whose bravery can be compared with the legendary Rani Laxmi Bai of Jhansi, Rani Rudramma Devi of Warangal. 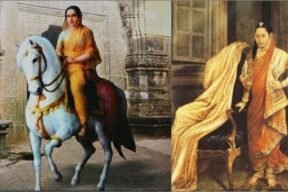 After the sudden death of Rajaram, Tarabai took over the charge of the Maratha kingdom as a governor (for her 4-years-old son, Shivaji II). Realizing the urgent need for strategic and stable leadership against Mughals, the 25-years-old widow established her as a deserved ruler without wasting any time on tears after her husband’s death. Mughal assumed that a weak widow and an infant could not deliver much resistance against their skillful army. They thought their opposition as weak and helpless. Nevertheless, they had absolutely been proved wrong in future.

Against Aurangzeb, Tarabai received all the responsibilities of war as a capable ruler. She also wanted a cease-fire from Mughals but Mughals refused. After that, Maratha soldiers crossed the Narmada river and attacked the Malwar in 1705 AD. In 1707, hearing the news of the death of Aurangzeb, Marathas had been certain. After the death of Aurangzeb, Mughals craftily gave freedom to Shambaji’s son Sahuji (Another grandson of Shivaji) to divide the Maratha kingdom by sending a new heir to throne. 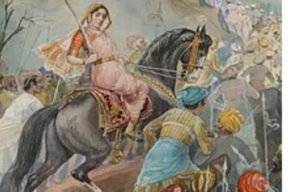 Sahuji challenged Tarabai and Shivaji II for the supremacy of Maratha confederacy. By the diplomacy of Peshwa Balaji Bishwanath, Sahu finally won and defeated Tarabai. In 1726 AD, Shivaji II died. After that, Tarabai solved all problems with Sahuji and lived in Satara without any political power. In 1740 AD, Tarabai brought a child named Rajaram II to Sahuji and presented him as her grandson. Later on, Sahuji adopted the child as his successor. In 1749, After the death of Sahuji, Rajaram II was declared as “Chhatrapati”. When the Peshwa Balaji Bajirao went to Mughal frontier, Tarabai advised Rajaram II to remove Balaji Bajirao from the post of peshwa. Rajaram II refused her proposal as he became closed to Peshwa. For this reason, Tarabai captured him in a dark pit prison in Satara.

Tarabai died at the age of 86 in 1761, a few months after Ahmad Shah Abdali demolished the Maratha Army at the 3rd battle of Panipat. If the stubborn queen would not take the charge in 1701, Maratha kingdom could not have survived in front of Mughals. If the newly widow had not taken the responsibilities alone, may be the history of India would have been separate.