The first and only all rounder in the Hindi film industry Farhan Akhtar has become a true sensation today. Born to famous parents Javed Akhtar and Honey Irani, Farhan Akhtar is oozing talent in every sphere in the world of cinema. Film direction, acting, scriptwriting, composing lyrics, producing and playback singing, you name it- Farhan can do it! Related to talented people like the wonderful Zoya Akhtar, Sajid Khan and Farah Khan besides his screenwriter parents, Farhan has it all. But these are things we all know about. Here are some quirky facts about Farhan Akhtar that will help you raise your points on the Farhan-o-meter!

1. The talented all rounder that all of us have come to love was not an all rounder always. Farhan Akhtar had been dismissed from HR College, where he had been studying law, during his second year. According to his beloved sister Zoya, he was quite the troublemaker when it came to studies. So yes ladies and gentlemen, our sensational star is not a graduate. Like many others.
2. Akhtar had penned down Dil Chahta Hai when his mother, Honey Irani, threatened to throw him out of the house and later he went on to bag a National Award for it. Go Farhan!
3. Funnily enough, Farhan has confessed that he is quite intimidated by Sonam Kapoor and feels extremely underdressed whenever beside her. Not that it affects his screaming fans. But oh well.
4. As told to us by Farhan himself during a talk show, our star suffers from Obsessive compulsive Disorder (OCD). He hates it when something is not in its right place around him. He just cannot sit calm until the object has been restored to its original position. So ladies, this is the secret behind his perfection.
5. If you’ve been pondering over when Farhan is going to open his Hollywood chapter then let me tell you that Farhan has already peeked into the world of Hollywood as a lyricist for Bride and Prejudice. 6. Before bestowing Aamir Khan with the role of DJ in Rang De Basanti, Farhan Akhtar had been offered the leading role. It’s sad that he didn’t agree to it.

7. Farhan believes that he is way better at acting than he is at directing. Well, we don’t necessarily disagree with him after Don 2.

8. Do you want to pull your hair out every time you try to sit and solve a Rubik’s cube? The solution is simple, take it to Farhan Akhtar. It is said that during his shoot for Karthik Calling Karthik he had learned to solve a Rubik’s cube and can solve it at one go now! He really is a genius. 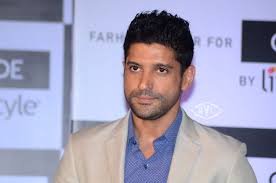 9. Not only prospering inside the Bollywood industry, Farhan has proven his potentiality outside as well. As the UN Women’s Goodwill Ambassador he has met legendary stars like Meryl Streep and former U.S Secretary of State, Hillary Clinton at the UN’s first meeting. He has also started the Men Against Rape and Discrimination (MARD) campaign in 2013 after the sexual assault and killing of Pallavi Purkayastha.

10. The Farhan that we saw in Zindagi Na Milegi Dobara sky dived, went deep sea diving and finally ran with bulls. But this great daredevil is actually scared of cockroaches. Hilarious.

But now that we know these unusual facts about him, it doesn’t really affect our love for him. In fact it might just make us love him all the more. We hope that he continues to win hearts and set examples for many years to come. Bhaag Milkha Bhaag to success!

Hello Humans of Earth! I am a fellow human being who is trying to make something out of my life at the moment. On my way to becoming a Graduate with a degree in English, I love to write about anything and everything. Food and Music are the main reasons for my existence! Hope you enjoy what little contributions I make to this world of Laughalaughi. :) Colleges and schools and the differences between them! One year after the earthquake: Nepal